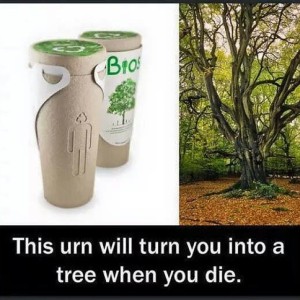 A friend of mine posted this image on Facebook.   Such a fantastic concept!

“How cool would it be to create a “living cemetery” of these that is a Food Forest ~ could literally feed one’s descendants, and they would be fed by their ancestors…   [see the link below for a description of a food forest]

Which inspired me to write this little poem:

I like to think of me
as a tree ~
with roots sunk deep
into ancestral dreams
and ever nurtured
by the fecund earth
with a willing embrace
of this world of form.

I like to think of me
as a tree ~
with branches reaching
toward what is to be
and ever enlivened
by the radiant sun
with a willing embrace
of the Élan Vital.

I like to think of me
as a tree ~
transmuting
past into future
heaven into earth
energy into form
dwelling within
the omnipresent.

And as long as I’m dwelling upon thoughts of trees, it feels fitting to share this talk that I delivered at a 911 Tribute in 2005.  (I was speaking in front of 3,000 people, and was so nervous that my knees were wobbling the entire time.)

As we begin our program this evening and prepare for the invocation, I would like to first bring everyone’s attention to the tree festooned with ribbons and streamers that stands to the west of the band shell. This is a Valley Forge American Elm, a testimony to survival – it is naturally resistant to Dutch Elm disease, and it has just been donated by area businesses to serve as a living memorial to all those who died in the attacks on September 11, 2001.

Throughout time, trees have always served as inspiring symbols, symbols of hope, of strength, of peace, and even the symbol of life itself. And in our country specifically, trees have been a symbol of the political principles that we treasure so deeply. The first Liberty Tree, located in Boston, was an Elm tree, just as this one is. The Sons of Liberty gathered and held their meetings in the shade of its branches. They flew their banners from its branches. In time, all 13 colonies each had their own Liberty Tree, which served as rallying places for the ideals of the American Revolution.

The original Liberty Elm in Boston was cut down by British soldiers, as an act of war, in 1775. The last of those original 13 Liberty trees to die was in Maryland, in 1999. It died as a result of a hurricane.

So in trees we see living symbols of our guiding principles, and we also see how those principles might be lost. We find ourselves gathered here this evening with two events in our minds and in our hearts – one, an act of war, 4 years ago, the other, a natural disaster, hurricane Katrina, mere days ago. Both of these events have presented our country with immense suffering and sorrow. Both of these events have presented us with immense challenges. They have challenged us to respond in a fashion that maintains and upholds the democratic principles that we hold so dearly, “that all people are created equal, that they are endowed by their Creator with certain unalienable Rights, that among these are Life, Liberty and the pursuit of Happiness.”

It has been said that the true meaning of life is to plant trees, under whose shade you do not expect to sit – to plant trees for generations that are yet to come. The founding fathers and mothers of this country planted many trees, in the principles they fought for and the institutions they created. We benefit from these trees which they planted so long ago. And so it is now our turn to plant trees. Thus, tonight we dedicate this Elm tree, as a living memorial, as a testimony to survival, as sign of hope for healing and peace. May we also plant trees of principles and institutions that will shelter and serve generations yet to come.

Welcome
The goal of the Beacon Food Forest is to design, plant and grow an edible urban forest garden that inspires our community to gather together, grow our own food and rehabilitate our local ecosystem.

What is a Food Forest?
A food forest is a gardening technique or [Permaculture] land management system, which mimics a woodland ecosystem by substituting edible trees, shrubs, perennials and annuals. Fruit and nut trees make up the upper level, while berry shrubs, edible perennials and annuals make up the lower levels. The Beacon Food Forest will combine aspects of native habitat rehabilitation with edible forest gardening. 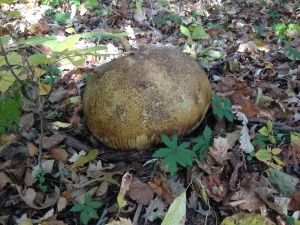 These mushrooms become enormous..
This one, that has already turned green, was about the size of a basketball…

For comparison, I placed my hat on the ground for these… 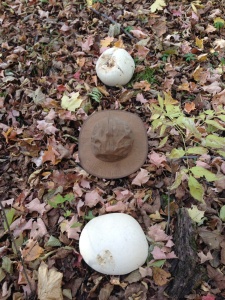 They can look a bit eerie, like skulls strewn across the forest floor,
lying among the dead leaves..
a perfect effect for this spookiest time of year… 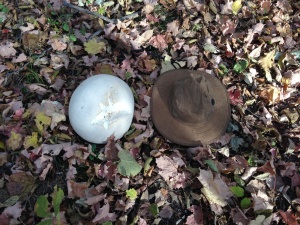 Regrettably, they were two far gone to eat..

And here are two photos of one I fried up last year
It was so large, it felt like carving a Thanksgiving Turkey… 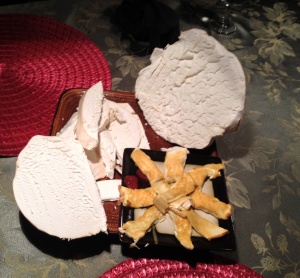 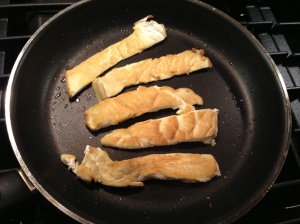 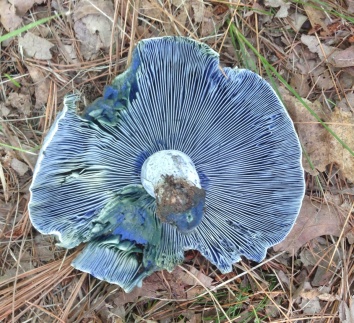 This blue mushroom received so much interest, deservedly, on my earlier post that I thought I’d pass along some info about it.   As I said in reply to a comment, it was almost otherworldly.   Such a stunning find.   Below is info from Wikipedia. 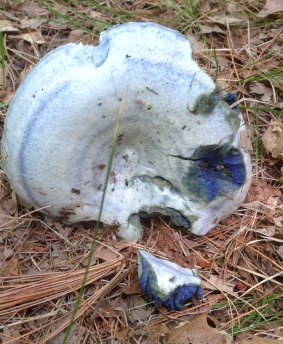 Anyone care to suggest a symbolic significance?
Couple of things to take into account:   1) it is not common in northern Minnesota, where I encountered it.  2) It’s symbiotic relationship with trees  3) it’s Edibility  4)  found around the world  5)  Of course, the stunning indigo coloration.   [you should be able to click the photos to get a more vibrant view)

Lactarius indigo, commonly known as the indigo milk cap, the indigo (or blue) Lactarius, or the blue milk mushroom, is a species of agaric fungus in the family Russulaceae. A widely distributed species, it grows naturally in eastern North America, East Asia, and Central America; it has also been reported in southern France.

Lactarius indigo is distributed throughout southern and eastern North America, but is most common along the Gulf Coast, Mexico, and Guatemala. Its frequency of appearance in the Appalachian Mountains of the United States has been described as “occasional to locally common”.[8] Mycologist David Arora notes that in the United States, the species is found with ponderosa pine in Arizona, but is absent in California’s ponderosa pine forests.[35] It has also been collected from China,[32] India,[36][37] Guatemala,[38] and Costa Rica (in forests dominated by oak).[39] In Europe, it has so far only been found in southern France.[40] A study on the seasonal appearance of fruiting bodies in the subtropical forests of Xalapa, Mexico, confirmed that maximal production coincided with the rainy season between June and September.[41]

L. indigo grows on the ground in both deciduous and coniferous forests, where it forms mycorrhizal associations with a broad range of trees.

Lactarius indigo is a mycorrhizal fungus, and as such, establishes a mutualistic relationship with the roots of certain trees (“hosts”), in which the fungi exchange minerals and amino acids extracted from the soil for fixed carbon from the host. The subterranean hyphae of the fungus grow a sheath of tissue around the rootlets of a broad range of tree species, forming so-called ectomycorrhizae—an intimate association that is especially beneficial to the host, as the fungus produces enzymes that mineralize organic compounds and facilitate the transfer of nutrients to the tree.[42]

The fruit body color ranges from dark blue in fresh specimens to pale blue-gray in older ones. The milk, or latex, that oozes when the mushroom tissue is cut or broken—a feature common to all members of the Lactarius genus—is also indigo blue, but slowly turns green upon exposure to air.

It is an edible mushroom, and is sold in rural markets in China, Guatemala, and Mexico.

The firm flesh is best prepared by cutting the mushroom in thin slices. The blue color disappears with cooking, and the mushroom becomes grayish. Because of the granular texture of the flesh, it does not lend itself well to drying. Specimens producing copious quantities of milk may be used to add color to marinades.

A chemical analysis of Mexican specimens has shown L. indigo to contain 95.1% moisture, 4.3 mg of fat per gram of mushroom (mg/g), and 13.4 mg/g protein. There is 18.7 mg/g of dietary fiber, much higher in comparison to the common button mushroom, which contains 6.6 mg/g. Compared to three other wild edible mushroom species also tested in the study (Amanita rubescens, Boletus frostii, and Ramaria flava), L. indigo contained the highest saturated fatty acids content, including stearic acid with 32.1 mg/g—slightly over half of the total free fatty acid content.[33]

THIS SITE BRINGS TO MIND THE OLD GEORGE CARLIN ROUTINE ~ “Whose got all the blue food?”

Lactarius indigo is a delicious edible mushroom– and fun to eat. There are very few blue foods. Even blueberries are not really blue, but purple!…. there’s just one natural blue food that I know — blue corn!… Lactarius indigo is delicious simply sautéed in butter, but the most fun way I have prepared them is in an omelet with or with scrambled eggs. You can guess what this does to the eggs– it turns them green!! Green eggs are lots of fun to have, especially for kids. You’re on your own for the green ham.

guess I should have eaten that mushroom!!!