Still
through all the eons
that I have lived
to see you once again
the hollow that remains
within my chest
forsaken in the sublime resonance
of the unstuck sound
that final sound
of the intonation of OM
that sacred syllable
that you draw from the depths
of my effulgent being
that lingers upon
my unkissed lips
the silence that hums
at the end of mmm
where sages hear
the unstuck chord
vibration of primal being
sound not made
of two things
striking together
but arising from the One.
Anahata Chakra
unfulfilled union
of Shiva and Shakti
of Purusha and Prakriti
a bell struck by love
a hollow filled
with sonorous resonance
but there is no
answering call.

Picture of the Sri Yantra at top is from: http://www.sriyantraresearch.com

All sounds within our range of hearing are created by things visible or invisible, striking each other or vibrating together, creating pulsing waves of air molecules which our ears and brain interpret as sound.

So, sound that is not made of two things striking together is the sound of primal energy, the sound of the universe itself.

And the ancients say that the audible sound which most resembles this unstruck sound is the syllable OM.

Tradition has it that this ancient mantra is composed of four elements: the first three are vocal sounds:

A” It represents normal waking consciousness, in which subject and object exist as separate entities.

“U” This vibration represents the level of dream consciousness and lies mid-way between waking state (A) and deep sleep (M). From the sleep state of consciousness associated with “U”, object and subject become intertwined in awareness. Both are contained within us.

“M” This sound represents the realm of deep, dreamless sleep. There is neither observing subject nor observed object. All are one and nothing. This is the cosmic night, the interval between cycles of creation, the womb of the Divine Mother.

In the Sanskrit tradition, this sound is called “Anahata Nada,” the “Unstruck Sound.” Literally, this means “the sound that is not made by two things striking together.”

For millennia, mystics have recounted their experience of this energy, which is said to manifest in our hearing awareness as a humming vibration around and within everything else.

Anahata (Sanskrit: अनाहत, Anāhata) is the fourth primary chakra, also called the Heart Chakra, according to Hindu Yogic, Shakta and Buddhist Tantric traditions. In Sanskrit, anahata means “unhurt, unstruck and unbeaten”. Anahata Nad refers to the Vedic concept of unstruck sound (the sound of the celestial realm). Ananhata is associated with a calm, serene sound devoid of violence.

Anahata is represented by a smoke-grey lotus flower with 12 petals. Inside is a smoke-coloured region made from the intersection of two triangles, creating a shatkona. The shatkona is a symbol used in Hindu Yantra, representing the union of the masculine and feminine. Specifically, it is meant to represent Purusha (the Supreme Being) and Prakriti (Mother Nature) and is often represented by Shiva and Shakti.

In the 1960s and ’70s Swiss engineer and medical doctor Hans Jenny performed experiments using sound frequencies on various materials such as water, sand, dust, liquid plastic and milk.  Dr Jenny placed the material on a metal plate attached to a crystal oscillator which was controlled by a frequency generator capable of producing a wide range of vibrations. He then filmed and photographed what happened on the plate.  He coined the term Cymatics (the study of wave-form phenomena), which is derived from the Greek ‘kyma’ meaning ‘wave’, and ‘ta kymatica’ meaning ‘matters pertaining to waves’.

The picture at top is of the Sri Yantra.  This is probably one of the most celebrated yantra in India, a symbol of Great Cosmic Power Tripura Sundari and is said to be in resonance with the energies of beauty and love. This is the pattern that the ‘OM’ is said to represent. Or rather, this is the image that the ancient Rishis envisioned when meditating on the ‘OM’.

When Om was chanted into the Cymatics apparatus, the Sri Yantra was said to form in the sand on the vibrating plate. If so, it confirms what the ancient Rishis experienced. 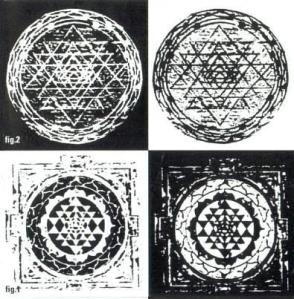